Daniel Pessin talks about his worst loss as a trader and what makes it worse, it was a bad trade 🙁

I experienced my worst loss today trading BHAT. What made it worse, it was a bad trade. It hurt really bad. The main reason why it happened was because I didn’t respect my stop loss. If I had just respected my stop-loss I would have lost roughly about $1,000. But because I didn’t respect the stop loss I lost a lot more. I ended up losing about $5,000. Once BHAT broke the stop loss support line that’s when I should have sold. After that point I did feel like sellers were controlling the stock and buyers seemed weak. But I stayed hopeful that buyers would make a push and the stock would reverse. I stayed in the stock and I didn’t sell hoping for a reverse. However, a reverse never came. The stock kept trending down further and further and I kept telling myself maybe it will turn, maybe it will reverse. This is an important lesson.

As a beginner trader, I think you don’t want to take a loss and you want to be optimistic. You have to understand though that you’re going to make losing trades and that’s okay. It’s not a bad trade if you enter a trade and get out at your stop loss. It’s a bad trade if you don’t get out at your stop loss because then you run the risk of losing more money. You need to respect your game plan. What’s the point of even having a game plan if you’re not going to follow it. That’s what makes it a bad trade. Not respecting your stop loss. In the future I’ll make sure to respect my stop loss and that will help me ultimately be a better trader. I heard that the best trades are usually the ones you get in and you’re in the green right away or there’s a bounce that puts you in the green right away and the worst trades are the ones where you’re holding and hoping. That’s what I experienced today. There were several key resistance lines where buyers had a chance to break through resistance and buyers failed everytime. Sellers were clearly in control of the stock. I saw the writing on the wall and just ignored it. I was stubborn.

Here was my original game plan. I thought the stock could run up to the 200-day simple moving average around $4.27. I was hoping to start my position around $3.50 and I was hoping that the stock would move up to around the 200-day SMA and then I would sell around that point. But right from the opening bell it had a slight drop then it had a large spike, and I was thinking okay it’s going to spike up but then it started falling back down. my stop loss was around $3.30 because that’s where the next support line was. However once it broke below $3.30 I did not sell the stock and I held it and unfortunately I held it all the way down to under $3 all the way down to roughly $2.60. And then I finally sold and took a huge loss. once it broke the support of $3.30 that’s where I should have got it now. That’s where sellers were clearly in control. Hopefully this is a lesson learned for the future and hopefully you want to make the same mistake and respect your stop loss as well. 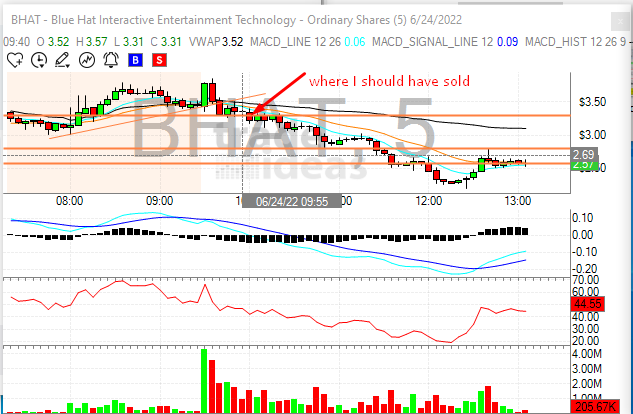 Respect your stop loss. It’s ok to take a loss. You are going to take losses as a trader, there that doesn’t mean its a bad trade. It’s only a bad trade if you don’t respect your stop loss. That’s exactly what I did and that’s why it was a bad trade. I will learn from this mistake and I hope you will too. Don’t hold and hope. It’s not worth it. Losses could get worse. There is no guarantee with anything and there is no guarantee the stock will bounce.